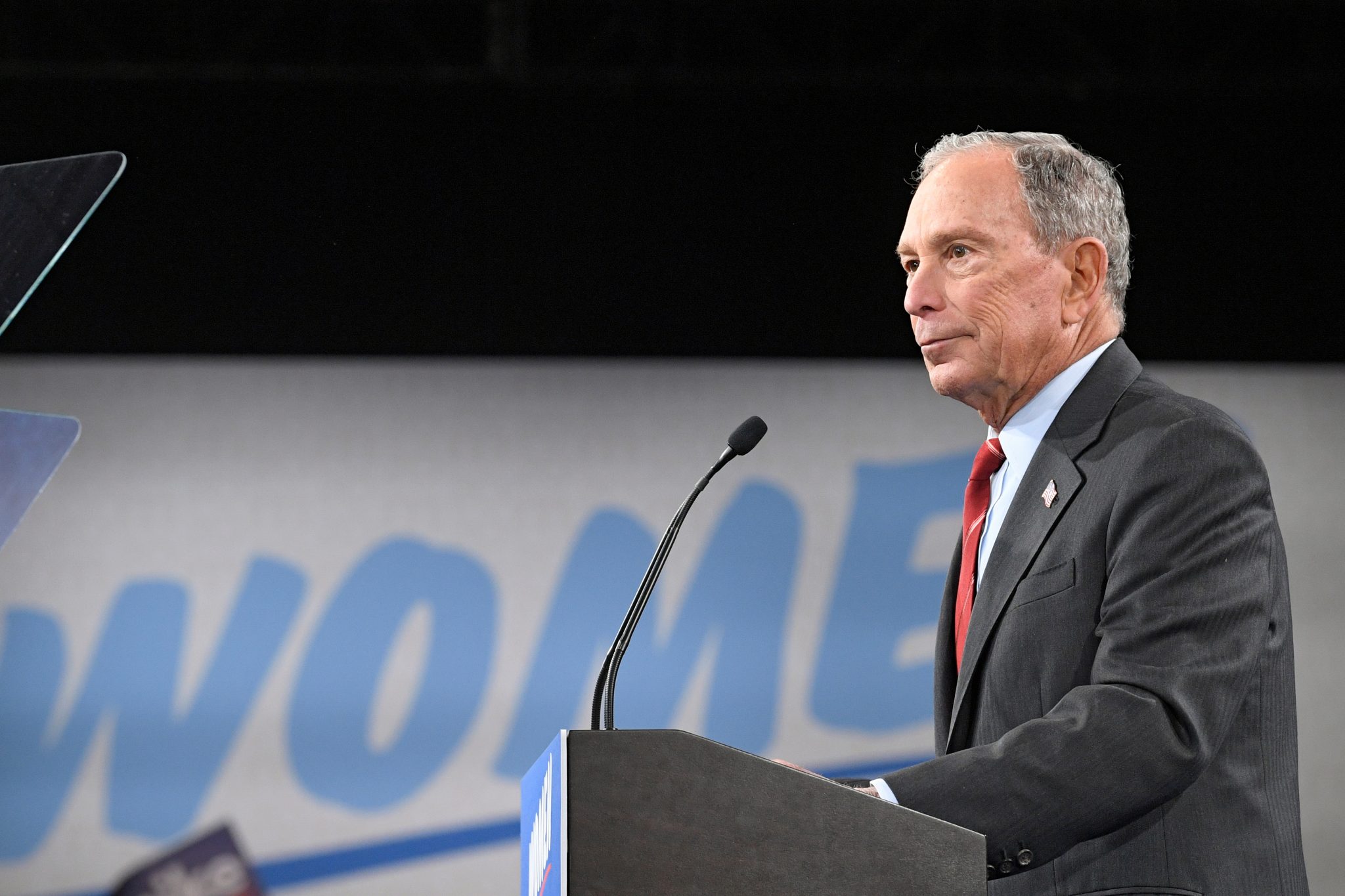 By Anubhuti Kumar and Shivani Persad

On November 24, former New York City Mayor Michael Bloomberg announced his candidacy for the 2020 Democratic Presidential nomination. Since then he has been often hailed as a “viable” candidate, smart businessman, and a candidate with a shot against Donald Trump in the general election. Our Republican uncles could get behind him, you know, the ones that hate paying taxes but drive on roads and send their kids to public schools.

According to this poll cited by Newsweek, Bloomberg’s support is at 12 percent amongst Asian American and Hispanic voters. Bloomberg’s campaign has smartly cloaked his candidacy in the word “moderate” and with the tide towards progressive values on the political spectrum, seated him on a platform promising to fight climate change, leaving him straddling the best of both worlds. These concessions to the left serve as red herrings to the fact that Bloomberg is painfully ignorant of what it means to lead an inclusive and diverse movement. Here are some reasons why:

Bloomberg is famously funding his own campaign and refusing to take donations. While at first thought this may make sense, (why should a billionaire be taking money from other people to fund his campaign?) it raises deeper questions about the role of money in politics.

Elizabeth Warren is widely touting the fact that she is taking no PAC money and not courting big donors. What is the value of this? It defines to whom she is accountable. It’s a show of direct support, or disapproval, to Warren’s actions and policy plans. If she wants her campaign to continue to be funded, then she needs to respond to the change her constituents want to see.

Bloomberg funding his own campaign means he is only accountable to himself, not the people who he claims to want to represent. Additionally, his virtually bottomless funding gives him an inflated platform that falsely projects his popularity and his ability and willingness to speak to the issues that move voters to action. Bloomberg doesn’t make airwaves because his supporters fund his ad buys and want him to share his platform, he makes it there he decided so. He claims it means he’s not answerable to anybody, but elected officials should be and need to be answerable to their constituents.

In this recent interview on “The Tonight Show,” former Mayor Bloomberg was asked about his platforms on public health, he mentioned people are dying of preventable causes. They definitely are, and the government should be doing exponentially more to protect the health of its citizens. That being said, anyone running for the highest office should be more informed than to think obesity is a choice and not a disease. Words mean something, and to minimize anyone’s struggle with their health in this way is unacceptable in our leaders.

3. According to Bloomberg, he passed gay marriage in New York before “anyone had even heard of gay marriage.”

People had heard of it. People had suffered discrimination and prejudice. And people fought for a more accepting world. It’s unacceptable that a person who has served as the Mayor of one of the most diverse cities in the world, a city that leads the LGBTQ+ rights movement, doesn’t realize how ignorant and deeply harmful to ignore the decades of organizing LGBTQ+ activists dedicated their lives to reach this moment.

Invisiblizing and devaluing the coalition-building and public education work that goes into building a movement, and that fact that it takes time, is entirely undermining of what the progressive movement has built and the enormous amounts of work organizations and individuals put in every day to build the kind of world we want to see. Milestone legislation doesn’t just happen, we continue the work of the activists that came before us.

In an era where our president uses tyrannical language and tweets about staying in office indefinitely, it’s not a joke to have changed the law to allow yourself to have an extra term in office. Actions our elected officials take set precedent, and its troubling that Bloomberg used his influence while in office to change New York City law to allow him to run for a third term, and changed the law back to two months before he left office.

He claims the terms are too short, that it’s impossible to get anything done in two four-year terms, but if Bloomberg believed that he wouldn’t have changed the law back to enforce the original terms limits before he left office. To take it upon yourself to decide that you are wise or deserving enough to stay in office an extra term is patronizing and an extraordinary display in arrogance. It should be disqualifying. One person is not above the law, the dangers of that are apparent.

[Read More: President Donald Trump to Not Include Citizenship Question on 2020 Census]

5. Bloomberg expanded ‘Stop, Question, and Frisk’ in his time as Mayor of NYC.

During his time as Mayor of New York City, Bloomberg expanded the “stop and frisk” policy. This policy created a negative culture of tension and distrust between the NYPD and communities of color. Oftentimes, this tension turned into violence. There is a recording of him claiming that “all the crime is in minority neighborhoods,” boasting that that’s why he put “all the cops” there. According to the New York Civil Liberties Union, people of color were more likely to be stopped and frisked even though their fellow white citizens were three times more likely to have a gun. As a result of this policy, between 2003 and 2013, more than 7,000 guns were confiscated, but gun crimes did not decrease. In fact, during the peak years of Stop, Question, and Frisk, murders with guns and robberies with firearms rose. Ultimately, the expansion of this policy didn’t accomplish much aside from an increase in unfair racial profiling in communities of color.

After 2013, the policy was abandoned and crime levels fell to some of the lowest levels since the 1950s. Since then Bloomberg continued to defend his expansion of the policy, even as recently as October 2019 to the Washington Post. However, just a month later in November 2019, he apologized at a church event in Brooklyn claiming, “I realize I was wrong.” As it became clear that his defense of this policy would cost him votes, he changed his opinion. Seems genuine.

6. He has plans to work with India’s Prime Minister Narendra Modi.

On September 25, 2019, Michael Bloomberg had a meeting with Modi at the Bloomberg Global Business Forum. The main objective was about strengthening global investment in India. They announced that Bloomberg and India would be partnering in two new initiatives.

Bloomberg will work with India to “navigate how it can be included in global benchmark indices.” Additionally, Bloomberg will provide support for a new International Financial Services Centre in Gujarat. During his speech, Modi noted that he recently cut corporate tax rates in India to “increase investment” because you know, all of those poor millionaires and billionaires just can’t afford those high taxes.

Modi is widely criticized for his authoritarianism and attacks on minority communities, much in the same vein as Bloomberg’s actions as mayor. We have plenty of examples of where these types of behaviors and entitled attitudes lead, and we know why they are morally wrong and impactfully harmful.

7. He and his company have been accused of sexual harassment and discriminatory practices.

Bloomberg LP has been accused of 40 cases of discrimination and harassment by 64 employees. Many of these women have been further barred from talking about their experiences due to NDAs they signed during the course of settlement agreements (three have recently been released from these after Senator Warren brought attention to the issue in the last Democratic debate).

It’s unacceptable for a man who has demonstrated such blatant disrespect and disregard for the women who worked for him to be considered for the highest office in our country. Who we elect serves as a demonstration of our values, and respect for women should be a basic expectation of those who represent our principles.

In yet another scandal of his still relatively young campaign for President, Bloomberg was recently criticized for the exploitation of prison labor on his campaign. While the thought of giving those in prison the opportunity to get work experience and save money to prepare them for life after might seem progressive, the reality of many mechanisms of employing prison labor is not.

In Bloomberg’s case, the campaign contracted a vendor called ProCom, a call center company that runs at least two of its call centers out of state prisons in Oklahoma to make calls to voters for the campaign. One of these prisons was subcontracted by ProCom to make calls on behalf of the Bloomberg campaign. Yes, the people making these calls were being paid, but the Department of Corrections communicates on its website that pays for incarcerated people are capped at $20 a month. I think we can all agree that’s not ethical.

The campaign ended its contract with ProCom on Monday after news of this subcontract leaked.

[Read More: Your TL;DR Guide to the 2020 Democratic Presidential Candidates]

At the Democratic debate in Las Vegas on February 19, many of these points were brought up by other presidential candidates. Most notably Senator Elizabeth Warren remarked, “Democrats take a huge risk if we substitute one arrogant billionaire for another.” The points in this article and others will be constant thorns in the side of Bloomberg’s campaign.

Even so, according to the New York Times, he is polling at 15 percent nationally – already in third place.

We have to be ready for these critiques,” said an anonymous staffer at Bloomberg 2020 headquarters in Times Square, “but at the end of the day, we are most interested in making Donald Trump a one-term President, and I want to back the person putting as much money as possible behind doing that.

Is the person with the most money going to solve the problems of average Americans, or switch his stances when it benefits him? Funding your own campaign makes you accountable to only yourself, and that’s not what democracy looks like.