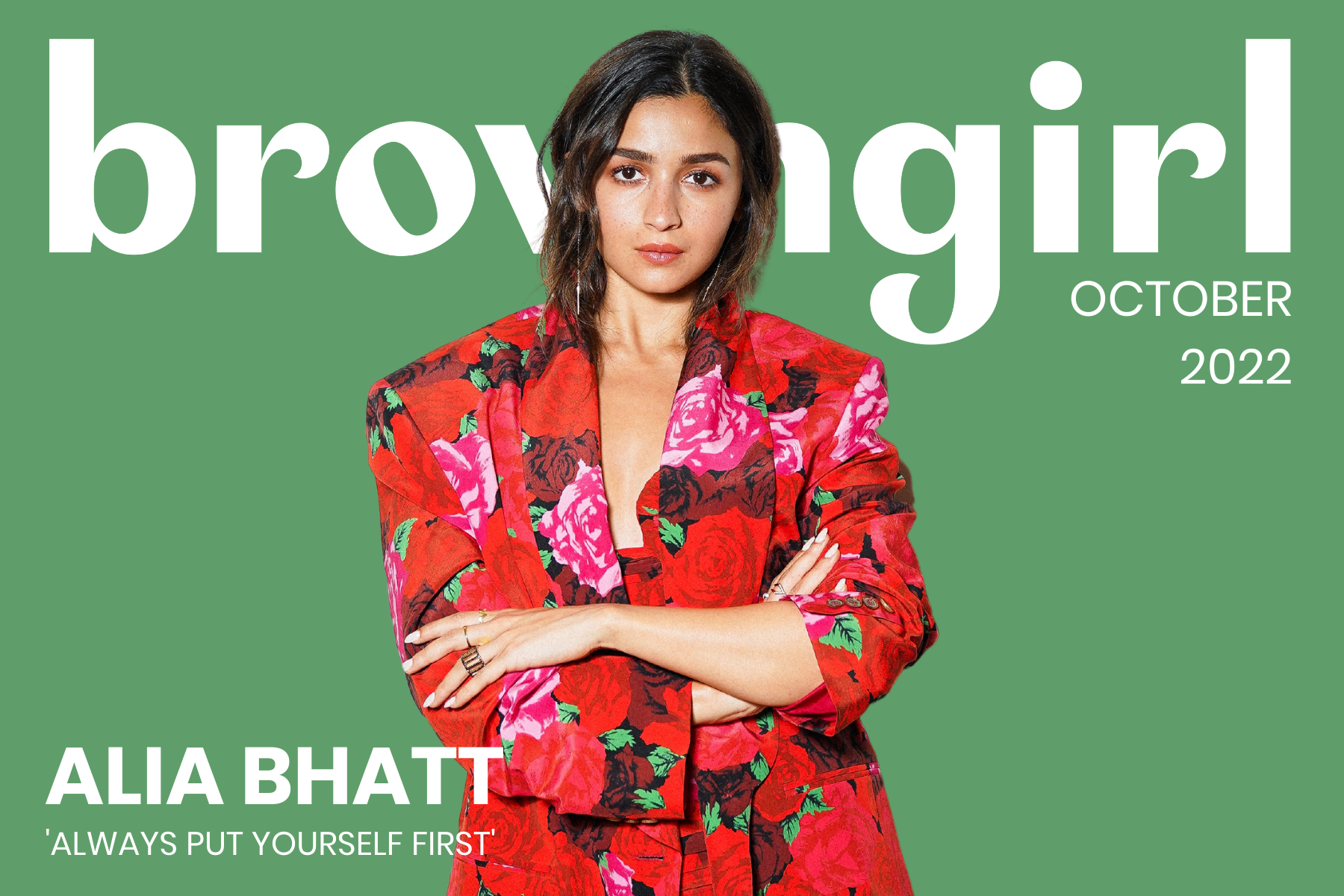 Alia Bhatt is known for her breakthrough roles, especially in women-centric films. Be it Veera from “Highway,” Kiara from “Dear Zindagi,” Sehmat from “Raazi,” or the brave Gangubai, her roles mold her into becoming a millennial favorite. Brown Girl Magazine’s Shezda Afrin chatted with the darling of B-town over a Zoom call as she discussed her new Netflix venture, ‘Darlings,’ which is also her very first co-production under her banner, Eternal Sunshine Productions.

“Darlings,” directed by Jasmeet K. Reen, follows the lives of a dynamic mother-daughter duo, played by Delhi Crime’s phenomenal Shefali Shah and Alia Bhatt, as they navigate troubled relationships with courage and care. The plot focuses on a prominent, yet sensitive issue worldwide: domestic violence.

Set in the bustling town of Mumbai, we see Badrunissa and her mother living across from each other and sipping chai together. Badru is seen as a woman who naively supposes that love can conquer all. She has that “I can fix him” optimistic attitude when her alcoholic husband Hamza, played by Vijay Varma, physically abuses her on several occasions. This story is not only a dramatic one but also a dark comedy. We see nuances of Badru’s bubbly self, her strong connection with her mother, and moments where I could not help but bite my nails due to the suspense.

[Read Related: To all the Movies I’ve Loved: Bollywood Edition]

As mentioned, this is Bhatt’s first co-production. When asked how she knew this was THE film, she didn’t hesitate to note:

It was something that came really naturally to me…I loved the story and how quickly the genre shifts from dark to comedy, from dark to comedy, and I just loved that whole play. These are the kind of stories I want to be involved as a producer and as an actor, of course.

As an actor, she has been giving us a variety, and she thinks “it’s time to be connected with such projects on a deeper level…as a producer.” Co-producing with Red Chillies Entertainment’s Gauri Khan, she says,  felt very easy throughout the journey of the film. The “Darlings” actress could “really focus on being an actor during the course of the shoot.”

Bhatt donned two hats on set but, she remembers that while she was the creative producer,

Gauri and Shah Rukh Khan both were very comfortable and handled all the logistics so I didn’t need to worry much. Because on set, I am an actor, not a producer, [therefore] I was involved as much as Shefali, Vijay, and all the actors were.

Her dedication as an actor truly shines in her latest role as Badru. According to her, Badru is someone who “is genuine and listens to her heart.” Bhatt remembers her previous role and how her skills built on. As Gangubai, she recalls, “she became a voice for the other women through being a victim on her own.” The “fighter spirit within her” goes to shine on as Badru, perhaps not for herself, but for the purposes of the situation. Her character is brought out by Shefali Shah’s as the characters often serve as foils to each other. Badru is blinded by love, neglecting the ‘red flags’ where the audience might want to shake her and give her a reality check. At the same time, Shefali Shah is portrayed as an independent woman and an entrepreneur who starts her own catering business, representing a refreshing maternal figure on-screen. Rather than a mother who suggests to her daughter “to brush it off and give him another chance,” Shah urges her abused daughter to leave her husband.

There are many other important characters in the film who showcase the need for support in such cases. For example, Bhatt’s favorite dialogue in the Netflix film is “because women let them.” This is the police officer’s befitting reply to Shah when she asks why women are treated violently by men. Reen’s film is a depiction of a somewhat progressive society in an atypical setting.

Without further ado (and giving away spoilers), we wrap this interview with a piece of advice from Bhatt to all the brown girls:

And, on that note, put yourself first and give yourself a treat on August 5th by watching ‘Darlings’ only on Netflix.