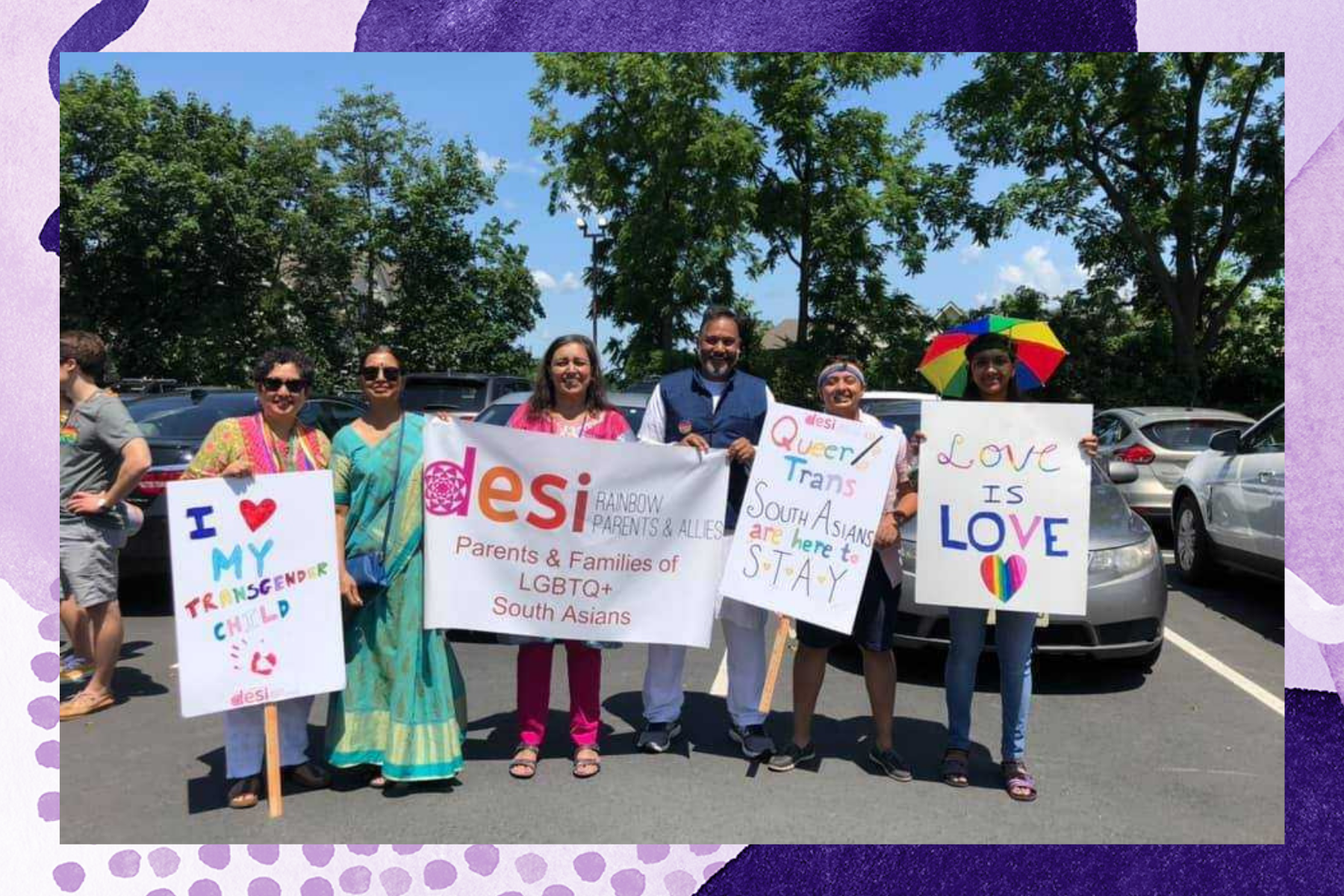 “I felt like a bit of a freak. I was the only brown mom showing up at these things.”

Aruna Rao’s search for support as the parent of a LGBTQIA+ child crossed state lines. The New Jersey mom found herself in New York City as she tried to connect with other parents of queer kids.

Rao’s need for deeper cultural understanding wasn’t being met, and there wasn’t a space just for South Asian parents and families. So, she figured she would start one by creating Desi Rainbow Parents & Allies.

“If you are someone who is an ally–an open and active ally of the LGBTQ community –you’re usually not doing it in desi spaces,” she said. “So that was the gap I was attempting to fill–the sense of cultural connection and being able to express your emotions to people who understand you and know where you’re coming from.”

Rao started by organizing a support group in her New Jersey living room in 2017. As a few families started showing up, the group grew by word of mouth and Rao realized she needed a bigger space. She streamed a monthly video conference call on Facebook to reach more families–and soon, people joined from across the U.S. and from other countries, including Canada and India.

“Wow, this was a need,” she said. “It was much bigger than I thought it was.”

Eventually, what Rao calls a “one-woman-show” grew, becoming more challenging to run. After 18 years as a mental health professional, she left her job to devote herself to Desi Rainbow.

“What I see with desi people and families is that there are various degrees of stepping in and stepping out,” she said. “You come out to a few people, you come out to certain circles, and then, you step back into the closet for many things. Sometimes it’s an open secret. Families don’t address it. This is what really needs to be addressed in mainstream resources–understanding the level of distress and grief that families are undergoing and the fact that they have nowhere to turn to. Your religious community doesn’t understand. Your cultural community doesn’t understand. Where do you turn?”

As Rao explored a formal structure for Desi Rainbow and adapted to networking during COVID-19, she started to notice more needs. Intergenerational “chai-and-chat” meetings that were meant to be casual, drop-in encounters turned into deeper, more meaningful spaces.

“People were bringing very heavy issues,” she said. “They were there to cry.”

She also realized the need to have separate support groups for parents. Some were further along with acceptance, and others were just starting out. Peer-to-peer counseling helped the groups grow during the early months of the pandemic, and the conversations started covering more complex issues like religious resistance in South Asian communities to LGBTQ individuals.

With a large network of guest speakers from different faith practices, Rao started hosting weekly conversations to help answer questions. These meetings took off, drawing viewers from Singapore, Hong Kong, Bangladesh and other parts of Asia, averaging around 60 to 70 people every week.

[Read Related: ‘Garbed by the Shades of Masculinity: My Coming Out Story’]

“A casual adventure turned out to be much larger than anticipated,” she said. Despite the limitations of the pandemic, Desi Rainbow moved forward with hosting several inclusive holiday gatherings, as well as focus groups with various faith communities.

“What people keep pointing out is this opportunity to be in community with 20-year-olds, 30-year-olds, or kids that perhaps you would have never encountered–and see those kids feel so happy, because you’re acknowledging them just as they are,” Rao said. “It’s a real give-and-take that happens across generations. What we get from the queer and trans community is that our eyes are opened to another way of being that we have never really thought about before. It questions a lot of our own assumptions, so this is a real learning opportunity for us.”

Rao said the organization wants to make further inroads in places of worship to encourage acceptance of LGBTQ+ people of faith.

“Too many LGBTQ+ people leave their faith communities, either due to condemnation of LGBTQ+ identities or shaming, silencing, and shunning,” Rao said. “The idea is to try and develop safe spaces in our religious communities, where you walk into a place where there’s congregations and ceremonies being conducted, and you walk in as your authentic self. That’s what we want for our community.”

Desi Rainbow is creating a culturally-competent curriculum that will be shared with faith leaders and their communities. Rao said the goal is to roll it out by the end of the year.

Born in Philadelphia, Stephen has family roots in India and Pakistan. He lives in Allentown, Pennsylvania, with his husband and their rescue dog Opal. Stephen is the Director of Communications and Marketing at Bradbury-Sullivan LGBT Community Center, serving Pennsylvania’s Lehigh Valley. He serves on the Northampton County (PA) Suicide Prevention Task Force and is an ambassador for STAY WEAR, a brand with an emphasis on mental health awareness.