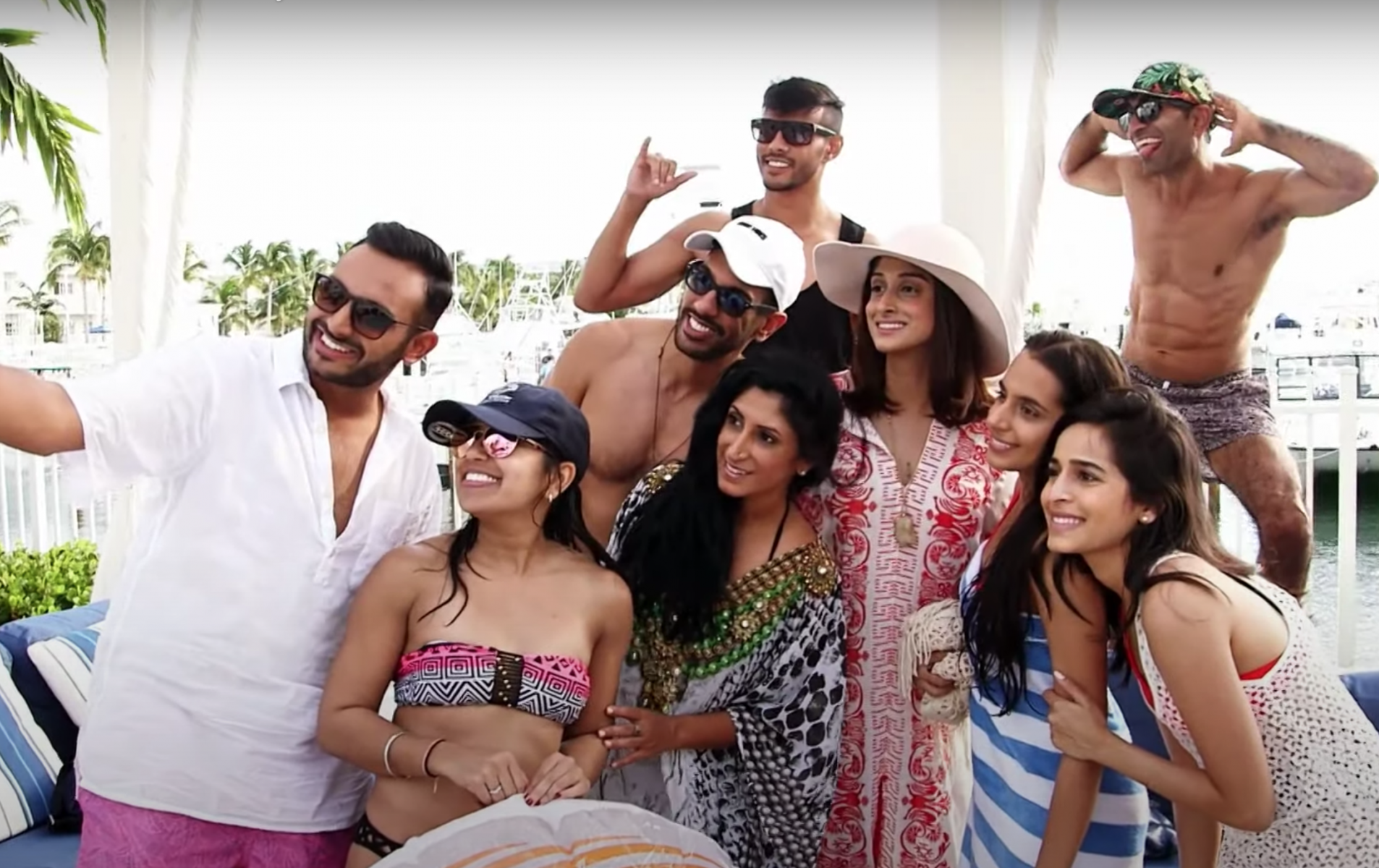 Vishal confesses this to friend Amrit as they practice a dance for Vishal’s engagement party with the fiancé of five years, Richa.

These are just three of seven main cast members of “Family Karma,” a Bravo reality series following the lives and families of Indian-Americans living in Florida that recently wrapped an eight-episode season (hopefully its first of many).

This confession struck me. Vishal struggled to stand up to his future mother-in-law all season and was often the butt of jokes.

He had trouble finding his path professionally and faced a lot of criticism, but in the finale, despite his insecurities, he finally took charge of a major piece of his future by planning this formal engagement.

While all of this may not sound like a big deal, it is. It isn’t every day you see a young Indian man on American TV talking about being anything but a success.

On the surface, “Family Karma” sounds like any other reality show – catty fights, drunken nights, feuding families, and budding romances, all under a pulsing tropical sun.

But for Indian-Americans, and the diaspora as a whole, it’s much more.

“Family Karma” is the first mainstream US reality TV series to have a full Indian cast — and boy is it a far cry from the controversial depiction given by Apu on “The Simpsons.”

In the finale a few weeks ago, we saw many conventional TV plot lines resolved.

Vishal and Richa finally got engaged and, after a season of will-they-won’t-they drama, Brian and Monica mutually decided to be just friends (at least for now).

At the same time, however, audiences saw Anisha, 34, confront her mother about freezing her eggs, while Nicholas (one of the few white faces on the series) opened up to his boyfriend Amrit’s mother about coming out, labels, and the lack of acceptance from his own parents.

These aren’t topics or relationships you’d typically see around an Indian dinner table.

In fact, few demographics and topics are left untouched by “Family Karma,” and that’s made many uncomfortable.

While personally, I’ve been ecstatic since I first caught wind of the show at the end of last year, not all Indians or South Asians felt the same. Many didn’t watch, fearing it would oversimplify the culture or highlight stereotypes and the negatives of the Indian community. Frankly, at times, it does.

But that’s why it is such a revelation.

Dharma Benni, the mother of Brian and just one of many charming parents in the series, says in the show:

“Everybody thinks every Indian is a goody two-shoes. Well, I’m here to tell you it’s all bullshit.”

And she’s right. “Family Karma” smashes stereotypes like this with vengeance.

Like the Persians, African Americans, and other minority groups that have been the subjects of reality TV over the years, “Family Karma” kicks its subjects off a pedestal and simultaneously out of their box of “otherness” in America to provide new dimension.

While progress has been made in the past 10 years (and most recently by Mindy Kaling & Lang Fisher’s “Never Have I Ever”), Indians are frequently put into cookie-cutter images of academia, spirituality, and modesty by the media. They are portrayed as doctors with thick accents and hard to pronounce names — but not by “Family Karma.”

Cast members are shown drinking, fighting, swearing, and even pole dancing on party buses. The main group ranges in age from their mid-twenties to their mid-forties. They’re aspiring actors, IT account executives, fashion designers, real estate professionals, lawyers, and the majority live with their parents. They are straight, gay, divorced, engaged, single, parents.

They span a wide definition of the term “Indian.”

Brian’s mother, for example, hails from the Indian state of Gujarat, while his father, Raj, is Indo-Caribbean born in Guyana in South America.

As the child of Indo-Guyanese immigrants myself, I can tell you how much this diversity means.

We are Indian by blood and have maintained a great deal of the culture (as the descendants of Indian indentured servants who ventured west under British contract in the late 1800s-1900s), but, as a lot of Indo-Caribbeans will tell you, we are often rejected or ignored as “not real Indians.”

Despite the shared ancestry, this stigma is strong and it’s not common to see many Indo-Caribbean families like the Bennis.

With their inclusion, “Family Karma” gave me and my community an acceptance and a representation as Indian we never thought we’d see.

And there’s more inclusivity. While the majority of the players were born in the US, Bali, 44, was born in India, while Monica was born in the USVI (US Virgin Islands). Most of the cast has roots in the North, but Anisha’s family is South Indian.

While all Indians in their own right, the cast members of “Family Karma” speak different languages and have different rituals. They have varied family histories and upbringings, but they come together to share the screen as one, proud, unified group (unless they’re fighting).

The fact is: No culture or people is perfect.

Inclusion and authentic representation are about accepting all variables; good and bad, common, and rare. They are about bringing all the options to the surface for equal opportunities and judgment, again, good and bad. It’s about having all experiences being showcased so onlookers can say “Hey, that’s just like me.”

For the first time that I can recall, Americans (and even Indian-Americans) are being shown a diverse, unbiased, and relatable portrayal of what it means to be Indian. For too long the community has been isolated as something “exotic” — a label cloaked as special or unique, but in reality, just meaning we’re different. That we’re something other than normal.

“Family Karma” is a vital first step into normalcy; into belonging.

It is America’s first chance to see into the lives of real Indian-American families, to look past the colorful rituals and language barriers, and possibly see themselves in the young cast.

“Family Karma” shares the unique everyday challenges and experiences many Indians face respectfully but it doesn’t shy away from showing human flaws; flaws people of all races and backgrounds have and can relate to.

Like its cast, the series isn’t flawless either. I’m curious if in a new season the show will welcome new people to speak to other prominent Indian faiths like Islam or Christianity or tread into discussions of arranged marriage or colorism — but the first season has laid a game-changing foundation.

This is a foundation I hope will see a second season and many more seasons to come. One that I hope will birth an American experience where a series like this, with so many Indian faces, won’t be seen as groundbreaking or out of the ordinary, but, maybe, just maybe, just another, fun, guilty pleasure reality show.

If you work in digital marketing, you’ve likely landed on her articles sitting at the top spot of Google in your searches for advice. Ramona Sukhraj has a B.S. in Marketing from the UCONN School of Business and has been sharing insights with millions around the globe for the better part of a decade as a digital and content marketing professional — but she is also a lifelong storyteller with a passion for creating. Ramona tells raw and relatable stories about life, career, mental health, and representation that not only shed light on new perspectives and her unique experience as a first-generation Indo-Caribbean American, but also entertain and create a sense of unity. When not writing, Ramona volunteers with local non-profits, aiding in their marketing and graphic design needs. She is also a Hollywood, Bollywood, and entertainment buff always looking for her next jet set!