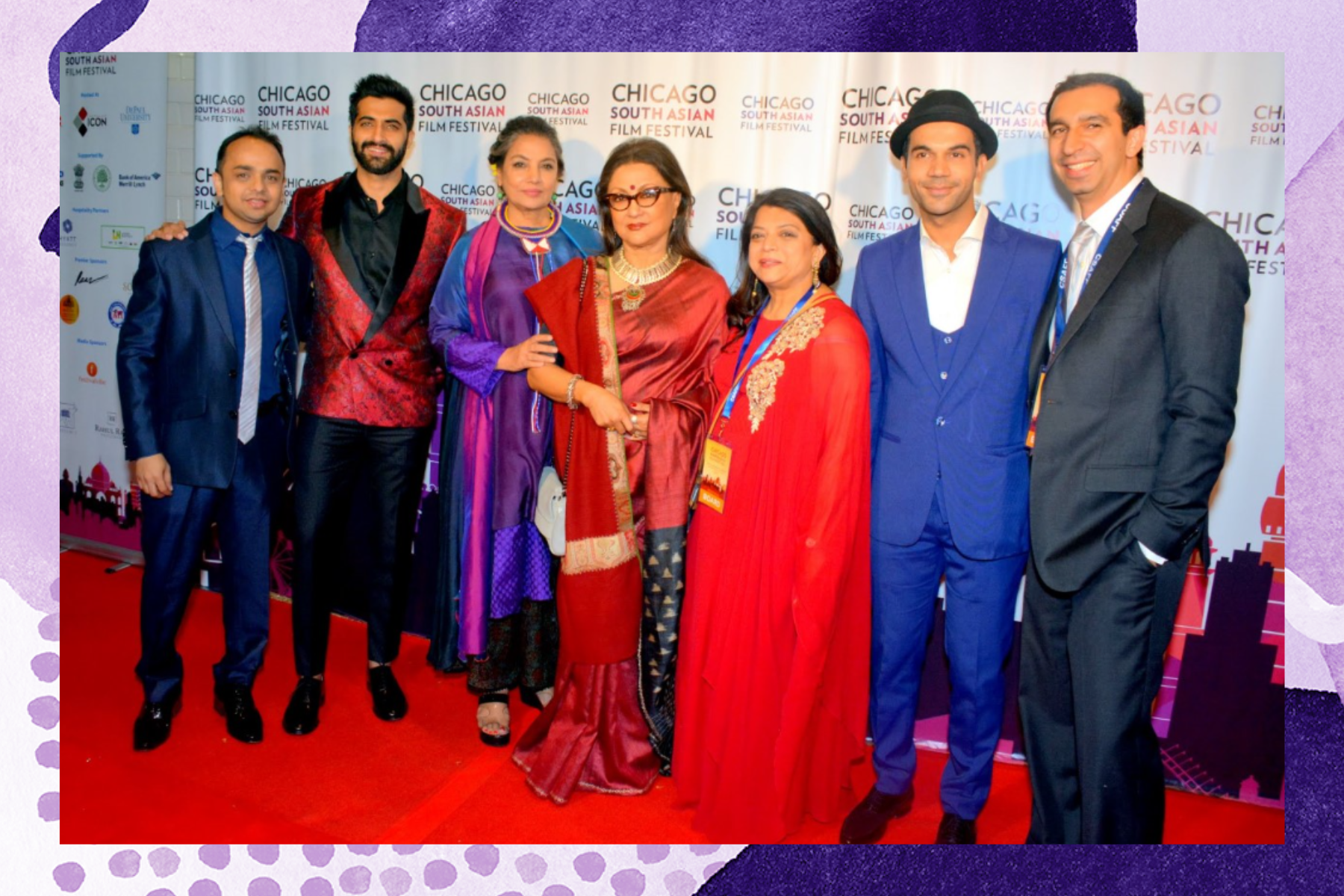 Let’s start at the beginning of your journey. How did you get involved with the Annual Chicago South Asian Film Festival? Additionally, what was your experience hosting the first time you took over as director?

I’ve always been a movie buff and enjoyed every aspect of filmmaking. When I moved to Chicago, one of my friends introduced me to the Chicago South Asian Film Festival. I was completely blown away by its mission, purpose, and most importantly, the films. I’m a storyteller and I have always loved the art of storytelling. I realized that books and films made me happy. Cultures, places, and people inspired me and through films I learned that I could experience all these in one capsule.

I was an audience member in the first year and enjoyed the entire experience. I decided to join the volunteering team and I found a family at the festival, and it was my calling! After 2 years of volunteering, I started heading the festival. Chicago is a city that knows how to strike a chord. It’s the city that overflows with art and culture, even during the coldest winters. I was thrilled to see how CSAFF was bringing art lovers under one roof. From its films, filmmakers, celebrities, artists, and the audience itself, everything was just soulful.

My first time as a director was very special. It was a journey full of learning, humility, excitement and at times it was overwhelming, but I was fortunate that my team, who are my friends as well and the board supported me wholeheartedly. Film Festival is like a wedding. There are lots of moving pieces, from Programming to securing venues, operational and logistical details, hospitality, events and overall involving the community.

As a festival director what are your general roles and responsibilities?

The biggest role of a Festival Director is to create a vision and life for your festival. Vision could be anything such as showcasing independent cinema, storytelling, bringing into light the issues which are not told but are still highly prevalent. It could be displaying art, culture, and steer meaningful conversation. I believe one of the important goals of being a festival director and having a festival is to create awareness among the audience and cultivate their interest towards independent cinema. If we see the art houses, there are films which leave you thinking, and those films create a sense of creativity in your audience as well. Festival directors serve as a cornerstone in connecting talents and artists and most importantly reviving the art and culture scene of the city.

Other tactical responsibilities are to ensure that the festival is seamlessly run and well attended. Major tasks include curating and programming films, scouting, and recruiting the right talent, providing memorable and enjoyable experience , and ensuring right logistics for the festival.

Do you see this festival as a platform to amplify independent films which touch on topics which may not be seen in mainstream movies? Additionally what topics have films touched on in prior years?

Filmmakers and their stories are the ethos of our festival. CSAFF has tried to cultivate an audience in the Chicagoland area which has started to see films beyond just a commercial cinema. Without film festivals, some of the notable directors wouldn’t have started their journey.

Yes totally, we are a South Asian Film Festival, and the goal of the festival is to touch all the topics which are relevant in today’s world. We have showcased films on LGBTQ, prejudice, racism, Women Empowerment, Environment, Harassment, social drama, sexual fluidity, Mental Health, various shades of Human behaviors and many more. We have all the genres of the film which make it rich, informative with a touch of art.

In the past, in addition to the above issues we have also touched on South Asian American cosmopolitanism, relations between capital and racial formations, diverse approaches and nuanced stories.

If there is one thing that is true about independent films, it is, it has a specific audience. Most of the time, people watch commercial cinema, but film festivals serve as a platform for the audience who can watch independent films to see new and unique projects and stories. Festivals help cultivate a unique sense of awareness among the audience which can have a major social impact.

We see this event as a form of community building and transformation in the South Asian Community. What types of support across the diaspora have you seen through out the years?

Our biggest strength is our people and the similar passion they share. We have a supportive Board, an energetic committee and volunteers, and most importantly, a fun-loving community. We have always strived to create a warm, creative, and homey atmosphere for filmmakers, volunteers, guests, and the audience alike.

We work very hard to broaden the reach and scope of our programming in getting films to diverse and varied audiences. We try to support new films, providing them the best possible launch platforms, but fundamentally this means providing them with broad and engaged audiences. We listen to our audiences carefully and try to find new ways each year to get them more involved. We try to not limit the notion of culture, but to look for the places where culture emerges. In short, we are not afraid of innovative ideas, and we constantly explore the event-cinema trend and bring daring, bold, international cinema to Chicago land.

Diaspora has always added a unique perspective to the films. We have always got a huge support in terms of art, talent, creativity and bringing that perfect balance of East and West. Diaspora experiences are very interesting and showcasing them to the broader audience has always had engaging discussions. The experiences of assimilating into the mainstream or navigating between two cultures or even negotiating a transnational identity is powerful.

As the Annual Chicago South Asian Film Festival is just around the corner what can we expect this year?

Sure, it is a busy month for me, and my team and a lot of exciting things are in store. This year we will be showcasing movies ranging from pure art house cinema to social issues, psychological thrillers, diaspora stories, documentaries, world premieres, North America premieres and many more. We are expecting 100+ film makers, artists and talents from all over the globe to be present in Chicago for the festival this year and 70+ films screened throughout the festival. Other events will be Opening Night red carpet, Centerpiece film, Filmmakers lounge series, Master classes, CSAFF After Party, Closing and Award Night, Press conferences, Mixers etc.

South Asia and its offerings have gradually become mainstream, especially here in Chicago. I sit on the board and am a jury member for other festivals where I’m always consulted for South Asian content. I am thrilled to see the progress of film production and film festivals in the city. Chicago is developing into a mini film production hub. We have a newly emerging talent and market for it, with the television industry and independent cinema by far growing the most. That’s one development I think is exciting because we’re seeing more and more great production coming out of Chicago. Festival will also be showcasing tons of local Chicago films.

It will be experiencing art and creativity on steroids.