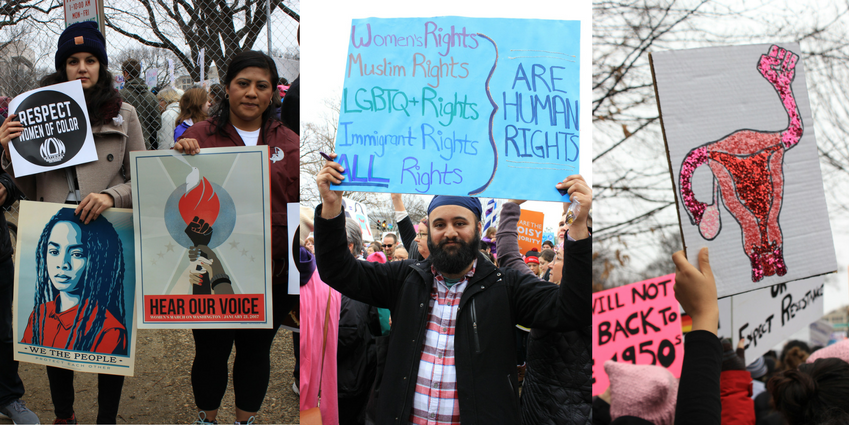 According to the Women’s March website’s mission and value, it reads”

“We stand together, recognizing that defending the most marginalized among us is defending all of us.”

An estimated three million people participated in the Women’s Marches across the United States this past weekend.

One day after the inauguration of President Trump, gender nonconformists, men, and women, came together and marched in support of not only women’s rights but also LGBTQ, immigrant, civil and other rights that need to be revisited and readdressed.

According to the official Women’s March website, the purpose of the march was to “stand together in solidarity with our partners and children for the protection of our rights, our safety, our health, and our families – recognizing that our vibrant and diverse communities are the strength of our country.”

With efforts to move forward from the fear many communities face nationally and internationally, the march was created to send a message to the new government that injustice will not be tolerated, especially and specifically by those of diverse religious faiths, immigrants of all statuses people identifying as LGBTQIA, Native, black and brown people, those with disabilities and survivors of sexual assault.

The website stated “This march is the first step towards unifying our communities, grounded in new relationships, to create change from the grassroots level up. We will not rest until women have parity and equity at all levels of leadership in society. We work peacefully while recognizing there is no true peace without justice and equity for all.”

The movement paved its way not only in major cities like Washington D.C., New York and  Los Angeles, but small towns as well. Within  Washington D.C. activists, advocates, performers and renown figures spoke for the cause.

“A movement is much more than a march. A movement is that different space between our reality and our vision. Our liberation depends on all of us, ” Janet Mock, author and activist, said.

Protestors stood with various signs displaying anti-Trump rhetoric to empowering phrases for women’s rights and intersectionality. Chants were made from “Welcome to your first day – we will not go away” to “Say her name” and “Women’s rights are human rights.”

While many voiced their opposition to the new president, it is important not to see this march as a just another movement against Trump, but one for all of us to unite for the rights of both women and our marginalized communities. Seeing the march as just an anti-Trump protest takes away from the meaning, mission, vision and influence it has. In other words, it belittles it.

“We can’t receive justice if we are not able to collaborate with other races, people from different backgrounds, to stand in solidarity,” Women’s March national co-chair, Tamika D. Mallory told, the Huffington Post. “We’re working around the clock to pull together what we believe will be one of the most historic moments of women from different races coming together to make our voices heard on issues pertaining to marginalized communities.”

The Women’s March on Washington, D.C. is a historically uplifting and significant moment, but it cannot be the last of our activism this year, or any year. This march, as stated in the vision, is just the first step towards our unification. It was a call to stand up, fight back and create awareness. It’s important to remember why you marched, for what and most importantly for whom.

What is saddening to hear is how many felt the presence of those who marched solely for “white feminism.” “It’s not feminism if it’s not intersectional.” You standing by my side with your version of feminism that thrives from mine or a marginalized communities oppression does not make you an ally and does not depict your unity with us. It further divides us.

If we want to fight for equality and justice, we must first see equality and justice within ourselves and with others. Be accepting and understanding. Only then will we succeed in no longer just advocating safety, justice and equality, but achieving it.

“Continue to embrace the things that make you unique even if it makes others uncomfortable. You are enough. And whenever you’re feeling doubt, whenever you want to give up, you must always remember to choose freedom over fear,” singer Janelle Monae said, at the March on Washington.

For more ways to be involved in the movement, visit the Women’s March official page to see 10 Actions for the First 100 Days that you can complete furthering the vision.

Book Review: Discover Your Best Self With ‘Beyoutifully Empower’ By Veena Ramaswamy